The 1976 standard atmosphere calculator computes atmospheric properties like density, temperature, pressure and speed of sound up to 86 kilometers altitude. This tool is mainly used by aeronautical engineers to perform calculations for aircraft. But if you always wanted to know the standard air temperature at 30,000 feet, go ahead and give it a try. 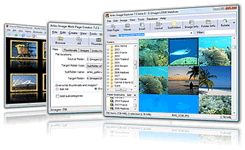 A long long time ago, before Flickr, Instagram or even Facebook existed, Arles Image Web Page Creator was a really popular way to publish photo galleries from a Windows PC on your own website. It is not supported anymore, but more than two decades after its creation, it is still being used by some die-hards 🤠

The Digital Dutch clock is an improved version of the Windows gadget sidebar clock. It features a digital clock, a day field, a date field and improved animations.